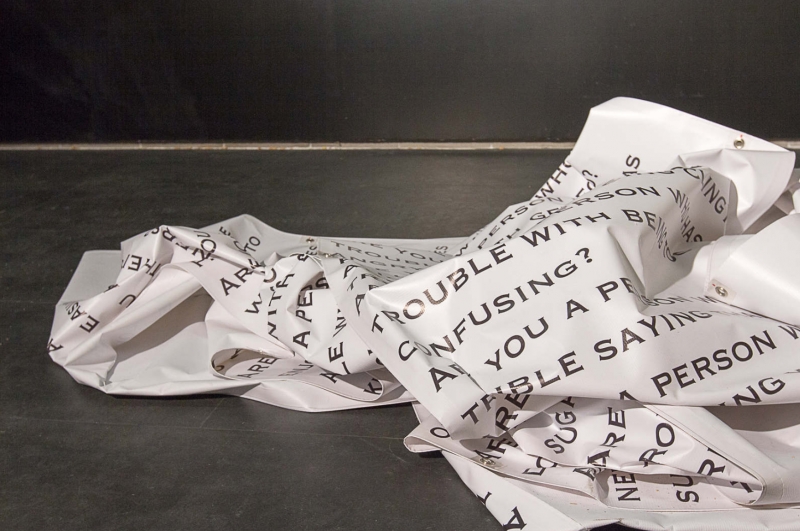 Carisa Mitchell's work approaches art in the form of text inside of storytelling while looking at appropriation, language, and poetry. She does this while using materials such as screen-prints, banners, photography, video, the voice, and performance. By investigating language, Mitchell seeks to talk about our placement and how this informs our views; in past works, she would use more confrontational language as a way to question or make statements to engage the audience to think about their own position inside the art and the world at large. However, inside of this language, she is interested in concealing parts of stories as her work becomes a place for fiction and reality. In this space she is interested in the inabilities to fully communicate and explain who we are entirely. While looking at the subjective, she wonders if these limits of self can be provoked beyond just the maker and how the self is a reflection of the external; such as the binaries between self and other.

With this in mind, the work presented for Capsule 1.51, Our Form Has Nowhere To Go While We Are In Actual Language, plays on the ideas of language as form as the language becomes something which is blurred, folded, and distorted. This work hints to messages inside of algorithmic language, found text, poetry, and spam email titles. In the same moment, it creates a new meaning; viewing it becomes active as the viewer has to piece together what they can. The plastic banners hint to never-ending marketing, which projects onto us what we should want and who we should be, while at the same time the artist alludes to the fact that she would sometimes prefer not to say anything at all.

Carisa Mitchell was born in the USA in 1986. She received her BFA from the University of Illinois at Chicago in 2009 and an MFA at HEAD (Haute Ecole d’Art et Design), Geneva in 2017. In 2017 she was the prize-winner of Red Cross – Genève Art Prize with Collectif MNGH. In 2018, she was a prize-winner for New Heads Fondation BNP Paribas Art Awards (Switzerland). She works in Geneva and Chicago.